4 Things We Learned From Stanford's Upset Of #6 USC 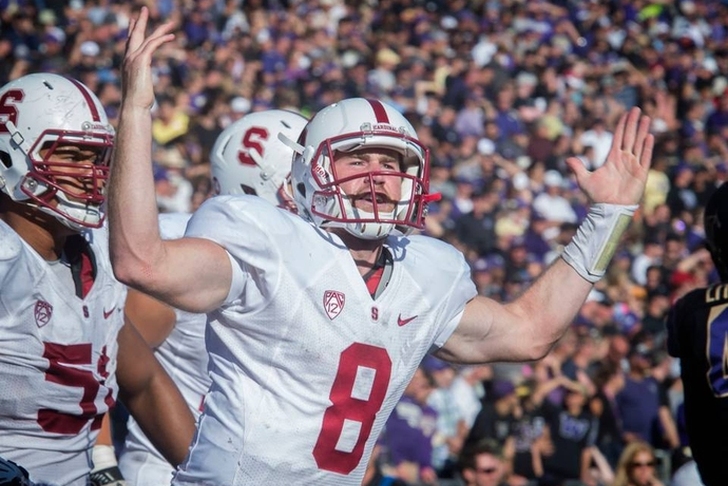 There were offensive fireworks a-plenty in tonight's game between the #6 USC Trojans and Stanford Cardinal, making for yet another crazy game between the two California rivals. The back-and-forth brouhaha ended badly for the Trojans, as Stanford's offense rose up to the occasion in the Cardinal's shocking 41-31 upset in Southern California. Here's 4 Things We Learned From Stanford's Upset Of #6 USC.

Who exactly is Kevin Hogan? Is he the guy who looked absolutely lost in his own skin against Northwestern in Stanford's season opener? Or is he the guy who just torched USC, throwing for 279 yards and two scores while the running the offense seamlessly all day long. We're not really sure. Stanford did run the ball almost 50 times, opening up the field for Hogan to hit receivers in one-on-one coverage. But, he still did his part and used the Cardinal's power running game to his advantage.

2. USC's Offense Is Not The Problem

Heisman candidate Cody Kessler was a notch or two below perfection on Saturday, throwing for three touchdowns and keeping the Cardinal's defense on its heels all day long. The Trojans running game rushed for 5.5 yards per carry, generally having their way with a normally stout Stanford front seven. We'll talk about the USC defense a little later on, but don't lay any blame on Kessler and the offense for things ending the way they did.

3. Pac-12 Title Is Still In Reach For Stanford

Let's stop worrying about Stanford's opening loss in what was AM on the West Coast. Let's forget about all of the talk positing the Cardinal as one of the likely-to-disappoint Power Five teams for the 2015 season. Stanford is now an Top-25 team in our opinion, and maybe even a borderline Top-20 team. They've also announced themselves as a legit Pac-12 title contender. Be forewarned. Stanford is alive and kicking.

4. What Exactly Is Going On With The Trojans Defense?

Did you watch the final quarter of this game? USC's front seven was routinely gashed for big yardage, while the secondary couldn't collapse in and alter any of the route of Stanford's wide receivers and tight ends. This was not the game of a championship defense. This was a game that young, non-coalesced squads play as they continue to figure themselves out. USC isn't dead by any stretch. But, the warning signs are now blaring.