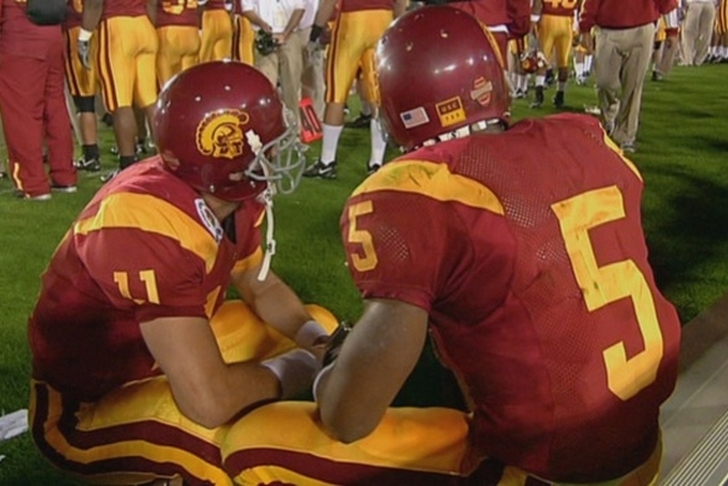 ESPN aired their latest documentary in their 30 for 30 series titled "Trojan War" on Tuesday night, detailing the rise and fall of the USC football program under head coach Pete Carroll. Here are four things we learned from the documentary:

USC and Texas started the 2005 college football ranked No. 1 and No. 2, respectively, and were expected to meet in the national championship game, which they did. However, while the Trojans simply saw Texas as another team they were going to roll over, the Longhorns actually wanted to face an undefeated USC team in the title game so they could be the ones that ended their winning streak.

The documentary shows the Longhorns running back into the locker room after the game to root for the Trojans in the fourth quarter of their near-loss against Notre Dame that season, then celebrated after USC scored a last-second touchdown. Texas even referred to themselves as the "Trojan Horse" throughout the season, showcasing their goal of lingering in USC's shadow all season only to jump out and beat them in the title game.

Bush won a Heisman trophy at USC and is one of the greatest college football players of all time, but Pete Carroll almost didn't recruit him. Carroll explained in the documentary that Bush was so dominant on his high school highlight reel that he thought he was just playing against extremely poor competition and wasn't that good. Luckily for him, he changed his mind and offered Bush a scholarship.

The Trojans had gone through nearly two decades of frustration at the bottom of what was then the Pac-10, and they wanted to bring in a big name to help resurrect the program. After striking out on all of their top options, they settled on Carroll, who had recently been fired after a disappointing stint with the New England Patriots. Fans and media alike saw the move as "more of the same" and heavily criticised the decision. Whoops.

The biggest message delivered in the documentary centered around how Carroll ran the program at USC. They attributed the rise of the program to Carroll's recruiting success, which was caused by his decision to fully integrate the program with Hollywood and the Los Angeles lifestyle by having celebrities like Snoop Dogg, Will Farrell, and Diddy on the sidelines. In order to do this, he essentialy opened up the program and allowed outsiders in.

Unfortunately for the Trojans, agents, club promoters, and other people of similar ilk were also infiltrating the program along with the celebrities, which ultimately led to the Reggie Bush scandal, NCAA probation, and the downfall of the program.