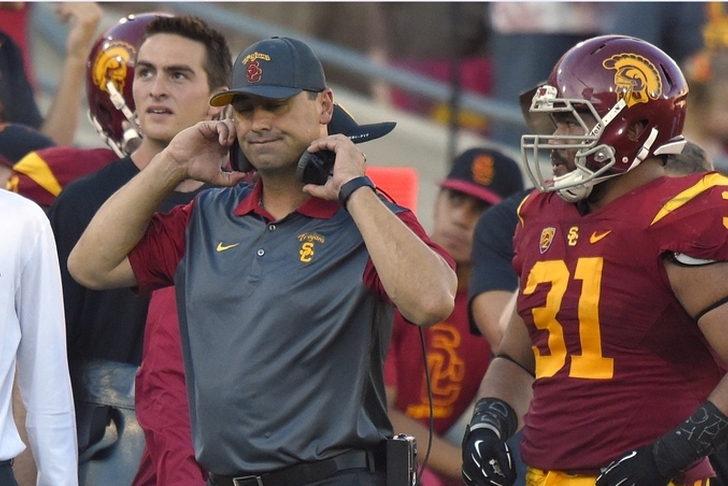 1. Keep Doing What They're Doing On Offense

Heisman candidate Cody Kessler was a notch or two below perfection during USC's 41-31 loss to Stanford, throwing for three touchdowns and keeping the Cardinal's defense on its heels all day long. The Trojans running game rushed for 5.5 yards per carry, generally having their way with a normally stout Stanford front seven. It got even better this past week as Kessler threw FIVE TD's in the team's rout of ASU. The offense is fine. They need to stay "fine" to keep the CFP ball rolling.

2. Figure Out The Defense And Quick

Did you watch the final quarter of the Stanford game? USC's front seven was routinely gashed for big yardage, while the secondary couldn't collapse in and alter any of the route of Stanford's wide receivers and tight ends. This was not the game of a championship defense. This was a game that young, non-coalesced squads play as they continue to figure themselves out. They seemed to do just that in giving up just 14 to the Sun Devils, but that needs to be the rule and not the exception for USC to get back in the national title race.

USC's road schedule is daunting going forward, with the two biggest challenges coming in South Bend against Notre Dame and in Eugene against Oregon. Want an easy way for the Trojans to get back into the swing of things College Football Playoff-wise? If they take care of business elsewhere and put together banner wins at Notre Dame and Oregon, they'll do just that.