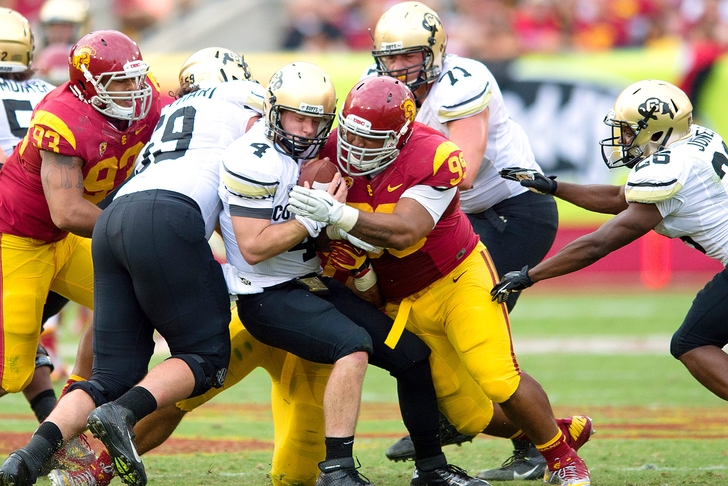 Spring practice is over for USC football, but that doesn’t mean we’re done analyzing what we saw in our first look at the Cardinal’s 2015 squad. Here’s our list of 3 Burning Questions For USC Football Following Spring Practice.

1. Can the offensive line hang?

New offensive line coach Bob Connelly is the unit's fourth coach is as many seasons, and there's a ton of question marks for him to sift through in order to help adequately protect Cody Kessler. Does Connelly lean towards experience and those who were battle-tested in 2014, or does he recognize that the team's younger linemen are the most talented of the bunch? It'll be a major mix-and-match endeavor, and it'll likely mean the difference between offensive success and offensive mediocrity.

2. What will the defensive line do without Leonard Williams?

There's nobody in this current crop of Trojans defensive linemen that strikes the same level of fear in opponents' hearts (yet..) that Leonard Williams did. However, the line still has a heck of a guy to work off of in Antwaun Woods and early indications are pointing to Texas Tech transfer Delvon Simmons finding his star at the LA Memorial Coliseum. USC will miss Williams, but it remains to be seen to what extent.

3. Are the Trojans ready for a tough road schedule?

There's a metric ton of top-caliber talent on this USC squad heading into the season. It's a true embarassment of riches. However, the biggest question surrounding the team's College Football Playoff hopes has less to do about what's going on in house and more to do with the team's 2015 schedule. Circle road games in Eugene against the Ducks and at South Bend against the Irish (along with a trip to the desert to face Arizona State) as the hinge games on the schedule. Win those and USC might be able to backpedal and/or moonwalk into a CFP spot.