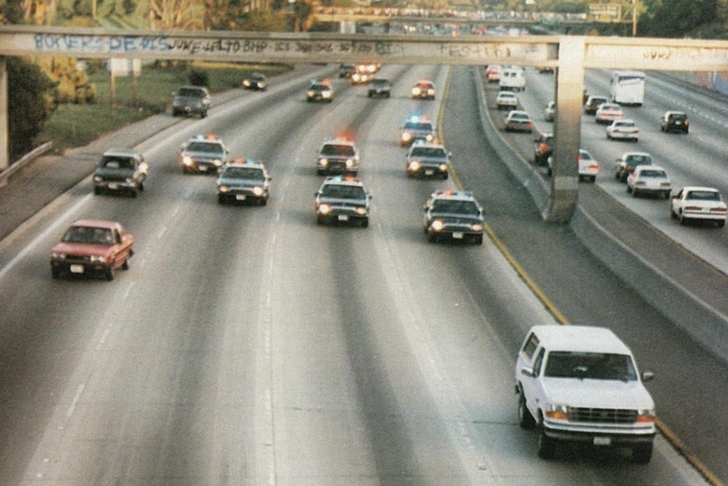 On June 17, 1994, OJ Simpson captured the attention of 95 million people around the world as the star football player/actor led the Los Angeles Police on a chase that would go down in history.

Here are a few things you might not know from that day.

1. The Kardashians saw the spotlight for the very first time

After double-murder charges were filed against Simpson, he was ordered to surrender himself to the Los Angeles Police at 11am on June 17, 1994. When he didn't show, Robert Kardashian, lawyer/friend of Simpson and father of Kourtney, Kim, and Khloé, read what was widely-interpreted as a suicide note and admission of guilt.

"Don't feel sorry for me. I've had a great life, great friends. Please think of the real O.J. and not this lost person." -OJ Simpson

Best friend and teammate Al Cowlings drove OJ the entire way. Cowlings and Simpson played together in high school, college and even professionally. He was later charged with aiding and abetting a fugitive.

3. The chase continued for almost 60 miles at speeds of just 35 mph

Police officials took a cautious approach as the world watched Simpson, who held a gun to his own head. Nielsen has called the pursuit the 3rd most impactful televised moment of the past 50 years.

"It was a record night at the time. It was dinner time on the West Coast and 9 p.m. on the East. People were fascinated and didn't want to miss it. It was as big as a Super Bowl Sunday up to that point,"

And Domino's wasn't the only firm who was impacted by the case. According to one estimate, the trial cost the United States corporate world $40 billion simply from time spent following the story instead of working.

5. The pursuit interrupted Game 5 of the NBA Finals

As the major networks scrambled to broadcast the circus in LA, NBC was in the middle of an NBA Finals game between the Knicks and the Rockets. For the remainder of the chase, the game was minimized to a picture-in-picture box in the corner of the screen while Tom Brokaw covered the chase.

6. Hundreds flocked for a first-hand view of the spectacle

News helicopters weren't the only ones to follow the chase - the people of Los Angeles hustled to freeway overpasses to get a glimpse, cheer, and flash signs.

7. Detectives spoke with OJ throughout the chase

In the middle of the chase, LAPD Detective Tom Lange realized that he had Simpson's cell phone number from a prior investigative interview. He phoned the fugitive and tried to coerce him into putting the gun down.

A full transcript of their extended conversation is available here

The rest, as they say...is history.