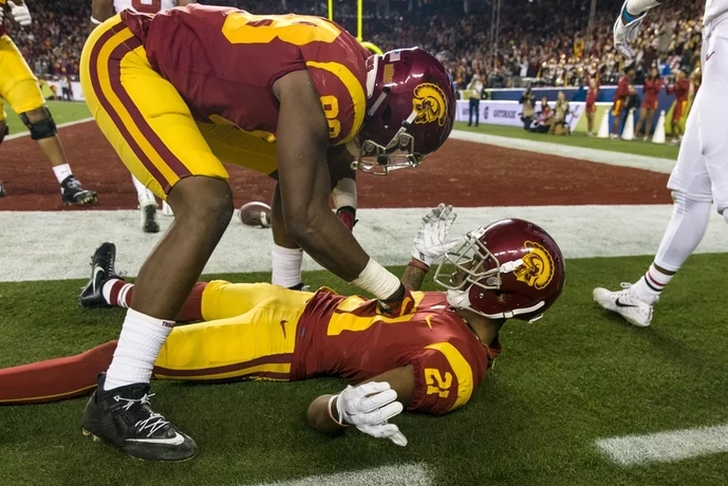 The #10 USC Trojans took a double-digit lead on two separate occasions but needed a key defensive stop in the fourth quarter to preserve a 31-28 win over the #12 Stanford Cardinal.

The victory gives USC their first Pac-12 title since 2008 and marks the first time that the Pac-12 South has won the conference championship game.

That offense was the story of the night as they moved the ball up and down the field to the tune of 503 total yards. A fast start allowed them to take a 17-7 lead following Sam Darnold's touchdown pass to Tyler Vaughns.

However, Stanford was able to answer right before the half, and that turned the game around. This deep pass from K.J. Costello to J.J. Arcega-Whiteside set up a short touchdown run that made the game 17-14 at the break.

The two sides traded touchdowns at the start of the second half, then it looked like Stanford was poised to take the lead on 4th & Goal from the half yard line - except USC came up with the stop.

That led to a 99-yard touchdown drive for the Trojans that iced the win, even though Stanford added a touchdown late.

Star Stanford running back Bryce Love rushed for 125 yards and a touchdown on 22 carries despite playing with a badly injured ankle, while quarterback K.J. Costello passed for 192 yards and two touchdowns.

USC clinches a berth in a New Year's Six bowl with the win, but they're simply too far down in the standings to really be a factor in the College Football Playoff race.