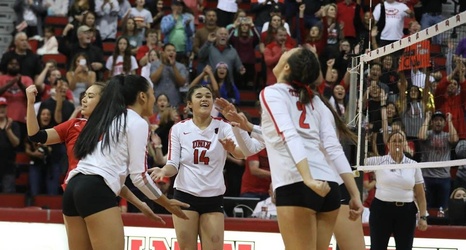 With four games left in the season, UNLV looked to continue its hot streak in its final two home games of the season. Entering the week, UNLV had won 11 of its last 12 games. The winning continued for the Rebel Women’s Volleyball team, as they defeated both UNR and San Jose State.

UNLV’s first game of the week pitted them against its rival UNR. With the crowd donning the color red on Code Red Night, the Rebels rallied to defeat the Wolf Pack in four sets, 3-1.

The two teams went back-and-forth on the first two sets, as both teams pushed the sets past the 25-point threshold.