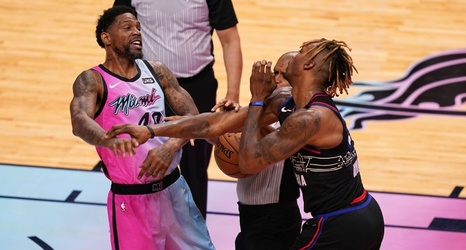 It took almost five months for Udonis Haslem to play in a game for the Miami Heat this season -- and he didn't last very long.

Haslem, who appeared in a game for an 18th straight season, played three minutes before getting ejected early in the second quarter of Thursday night's game against the Philadelphia 76ers.

He checked in with 59.3 seconds to go in the first quarter of what is Miami's final home game of this season, getting a standing ovation from the several thousand fans in attendance.

And, briefly, he had some success.