Lloyd: Have to feel for goalie letting in 13 goals 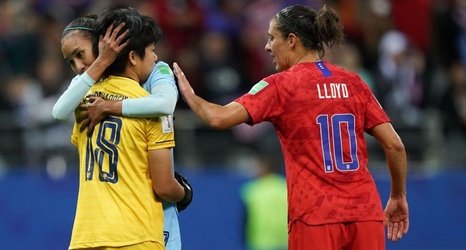 PARIS -- While debate continues elsewhere as to the sportsmanship of the United States beating Thailand 13-0 in the Women's World Cup, two of the players directly involved found common ground in the aftermath of the experience.

On Thursday, Thai goalkeeper Sukanya Chor Charoenying tweeted her appreciation to Carli Lloyd for the U.S. captain's words of encouragement in a conversation immediately after the final whistle. In her tweet,Chor Charoenying said "Your words that you told me make me strong."

And Friday, Lloyd expanded on her perspective of the encounter.

"Obviously, I'm a player, and this team is full of players who want to battle it out, want to go full throttle," Lloyd said.