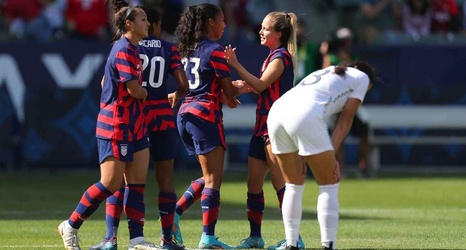 The United States beat New Zealand 5-0 in the SheBelieves Cup in Carson, California, on Sunday afternoon thanks in large part to three own goals from New Zealand defender Meikayla Moore.

The U.S. was up two inside of six minutes following a pair of own goals from Moore, who redirected a cross into her own net and then saw a header from Margaret Purce go in after bouncing off Moore's head.

Vlatko Andonovski's side continued to pile on the pressure as the half wore on and went three up with yet another own goal from Moore, who was substituted shortly after for Rebekah Stott to end a brutal afternoon for the defender.