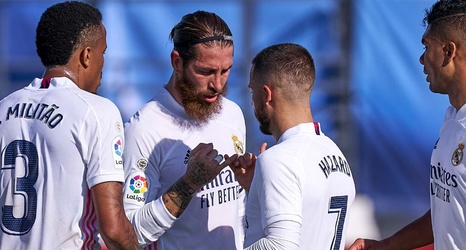 Eden Hazard scored his first Real Madrid goal for more than a year as the LaLiga champions eased to a 4-1 win over Huesca.

Making his first league appearance of the season, the Belgium star opened the scoring in brilliant fashion before Karim Benzema doubled the lead at Estadio Alfredo Di Stefano.

Federico Valverde scored the third after some fine interplay between Benzema and Hazard, who looked sharp throughout his hour on the pitch, before David Ferreiro's consolation.

Much of the pre-game talk had centred on Benzema and a recording of him appearing to tell Ferland Mendy not to pass to Vinicius Junior during the Champions League draw with Borussia Monchengladbach, and the striker should have scored his side's fourth when teed up by substitute Vinicius in what would have capped an improved Madrid display.