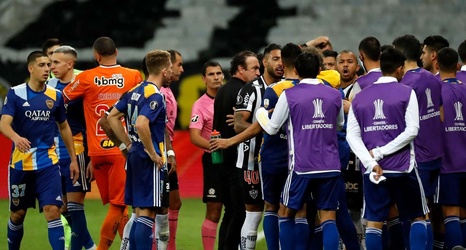 Eight individuals linked to the club, including several players, were held by authorities following a bad-tempered end to the clash

Boca Juniors have condemned the two VAR decisions they claim robbed them of Copa Libertadores victory over Atletico Mineiro, but played down the subsequent violent incidents that caused the team to spend Tuesday night sleeping outside of a police station in Belo Horizonte.

The Xeneize went down on penalties in the last 16 after drawing both legs 0-0.

But they also had a goal ruled out in both of those games for marginal infractions - Diego Gonzalez's strike in the first leg was chalked off for a foul in the build-up, while on Tuesday, Gonzalez was judged to be slightly offside in the move leading up to Marcelo Weigandt's second-half goal - either of which would have been sufficient to send them through to the quarter-finals.