Without NCAA Tournament experience, UConn players are relying on coaches who have been there before 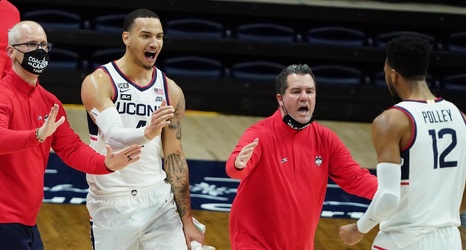 No one on UConn men’s basketball’s roster has played in an NCAA Tournament game. UConn itself hasn’t played in a tournament in five years, which has been well documented the past couple of weeks.

The only people in the program who have been through this experience are the coaches – three of which have national championships under their belt.

Head coach Dan Hurley has made the NCAA Tournament twice, in 2017 and 2018 with Rhode Island. Assistant coach Tom Moore has been on two National Championship-winning staffs under head coach Jim Calhoun at UConn in 1999 and 2004.