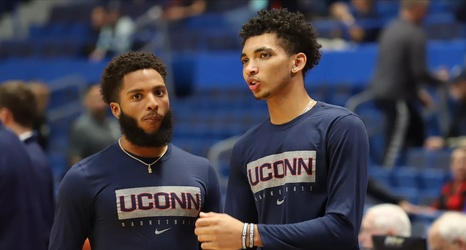 An abundance of exciting guards have graced Gampel Pavilion with their playmaking over the last couple of decades, and the upcoming season will be no exception. In fact, UConn men’s basketball fans are going to be treated to a second look at two returning stars and a first glimpse at a new seasoned stud.

James Bouknight and Jalen Gaffney are back in Storrs this season while RJ Cole, a talented transfer from Howard, is getting the opportunity to shed his UConn practice jersey for the first time after a forced year off. All three of them sat down with media members Wednesday to talk about the upcoming season and what they have done since we last heard from them in March.