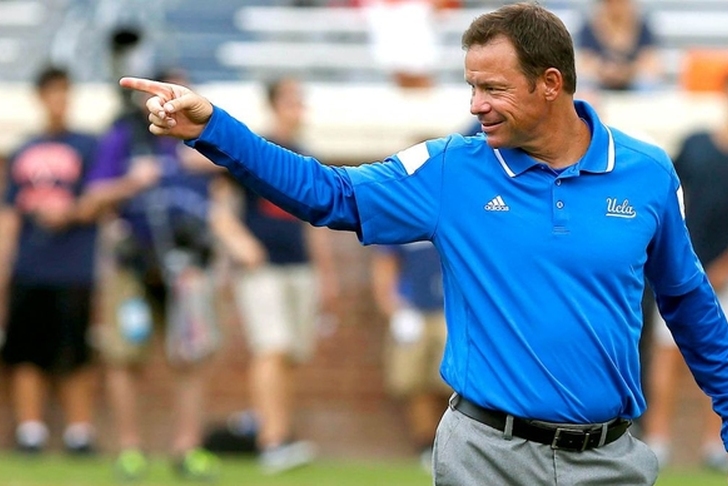 The UCLA Bruins are in the process of putting together another solid recruiting class under head coach Jim Mora. The Bruins already have several players committed, but they aren't done yet. They're making a strong push during the last month of recruiting as we head towards National Signing Day on Wednesday, Feb. 3. Here's all the latest news and rumors you need to know for UCLA football recruiting.

Bruins Land Jake Raulerson
Raulerson won't count towards UCLA's recruiting class, but landing him is a big addition for the Bruins. He's a graduate transfer with two years of eligibility left. Raulerson was a four-star recruit who went to Texas, but is now heading West.

I will be taking my talents to Westwood! Can't wait to start this new chapter in my life! #GoBruins pic.twitter.com/ikO3VnT9DZ

Raulerson is eligible to play right away and is expected to start at center. The Chat Sports Android and iPhone app has more on Raulerson.

UCLA Misses Out On Randy Moss' Son
The Bruins were among the final three for TE Thaddeus Moss, the son of NFL great Randy Moss. However, Moss announced he's heading to N.C. State.

I'm beyond blessed to announce that I will be shutting down my recruitment and committing to Nc State #Pack16 pic.twitter.com/rKPgAd8z6o

While the Bruins didn't land Moss, they already have a commitment from TE Jordan Wilson. For more on UCLA's class, download the Chat Sports Android and iPhone app.

Bruins Add Three-Star DB
UCLA picked up a commitment from three-star DB Keyon Riley. He announced his choice on Twitter.

Blessed to say that I am committed to be a UCLA BRUIN  #4sup #BruinRevolution pic.twitter.com/XtNAUMweNG

Riley made the announcement before his official visit was done with UCLA. He'll likely play safety. Download the Chat Sports Android and iPhone app for more on Riley.

Where UCLA's Class Sits
The Bruins rank 11th in Rivals.com's recruiting rankings. The Bruins have 22 commits, including eight four-stars. No Pac-12 school is ahead of UCLA. The current star of the class is four-star WR Theo Howard. He's the No. 38 overall player in the class of 2016. For more on UCLA's class, download the Chat Sports Android and iPhone app.