UCLA Gymnastics lands their highest score of the season after loss 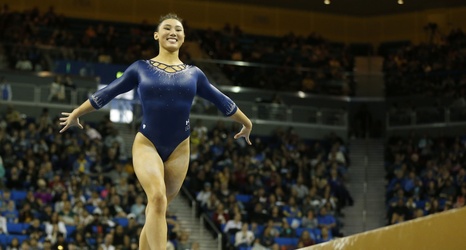 A week after their narrow defeat at the hands of the Oklahoma Sooners, the UCLA gymnastics (11-1) team came home to Pauley Pavilion on Sunday and got some payback on the unsuspecting Stanford gymnastics team.

The Bruins were not messing around in this win as they had topped the Cardinal in all four events and scoring a season-high on the balance beam (49.700) and the vault (49.450) which not only led to the most points they have put up in a meet this season, but tied the points in the nation this season.

UCLA’s dominance on the beam had a boost behind a 10 by Kyla Ross.