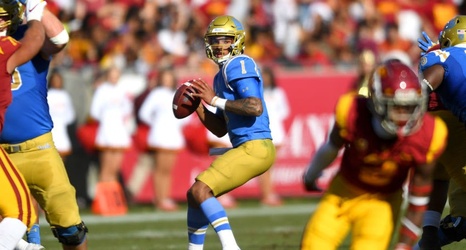 LOS ANGELES, CA - NOVEMBER 23: Quarterback Dorian Thompson-Robinson #1 of the UCLA Bruins sets to pass the ball in the first half of the game against the USC Trojans at the Los Angeles Memorial Coliseum on November 23, 2019 in Los Angeles, California. (Photo by Jayne Kamin-Oncea/Getty Images)

As UCLA Football’s season nears, it is time to take a look at each position with a preseason preview, kicking off with the quarterback position.

Quarterback play has been a problem for UCLA Football ever since Josh Rosen left for the NFL in 2018.