Meet The UCLA Coach Who Got Into It With Diddy 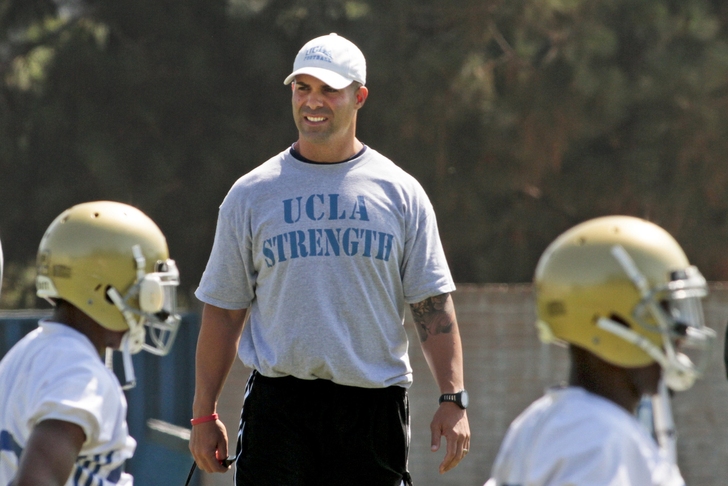 The UCLA Bruins made headlines last month when Sean "Diddy" Combs got into a fight with an assistant coach, who was later identified as strength and conditioning coach Sal Alosi.

According to TMZ, Alosi was “screaming at [Diddy's son] Justin [Combs] on the field,” and Diddy later “confronted the coach and grabbed him.” The Diddy was then arrested for "assault with a deadly weapon", with the weapon being a kettlebell, and remains in custody on UCLA's campus.

Diddy will not be charged in the case, but the incident did focus a bright spotlight on Alosi, who is best known for tripping a player running down the sidelines while he was a member of the New York Jets coaching staff.

Alosi left the Jets shortly after the incident, and had remained largely anonymous while serving as the strength coach at Bryant University and UCLA (where he was hired in 2012) - until he was on the receiving end of Diddy's kettlebell.

How does he keep finding himself in the headlines?

"When it happened, I heard it was a UCLA coach," Drew Bernstein, who has known Alosi since 1999, told Bleacher Report. "I said at the time that I bet Sal had something to do with this. He has that bouncer mentality.

"Sal had very little patience. When he gave you instructions, you wanted to follow them. He also had that Long Island sense of humor. He's brash. He's sarcastic. He's straightforward. He'll tell you when you're out of shape or bringing a s--t effort."

That hard-nosed intensity which has gotten him in trouble has helped Alosi rise up the coaching ranks quickly as he the Jets staff in 2002 after just one season at Hofstra. He later joined the Falcons in 2006, but quickly went back to New York.

Despite the incident with Diddy, Alosi has kept his job as UCLA's strength and conditioning coach.

Follow our UCLA Bruins team page for all the latest Bruins news and rumors!