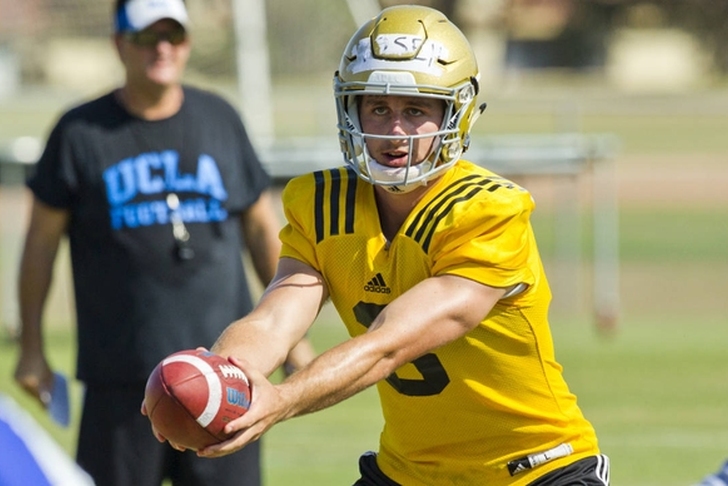 If you had quizzed 90% of the nation's college football experts about who would be the one Power Five team to warrant discussion about inclusion in the College Football Playoff discussion, they likely would have picked the Boise State Broncos. However, after the #19 BYU Cougars (2-0) gutted the Broncos last week, they're the ones getting all the non-Power Five buzz. Things don't get any easier on Saturday, though, as BYU heads to Southern California to square off with the #10 UCLA Bruins. Who's got the edge? Here's our BYU Cougars vs. UCLA Bruins Preview & Prediction.

BYU instantly becomes a College Football Playoff contender if they pick up a win over a top-ten Pac-12 squad on the road. UCLA will get a major boost too with a win, upending a Top-20 team that's riding a wave of momentum and publicity into Saturday's contest.

Which freshman quarterback will get the job done -- UCLA's Josh Rosen or BYU's Tanner Mangum? Mangum has thrust himself into the national spotlight with Hail Mary connections in back-to-back weeks, but Rosen is the more polished product with a blue-chip pedigree behind him. The team who gets the most out of their inexperienced signal caller will likely win this ranked non-conference tilt.

What They're Saying About The BYU Cougars:

The Cougars get another shot at glory

The Rose Bowl is the perfect place for a BYU upset

What They're Saying About The UCLA Bruins:

Inside the Bruins heading into Saturday's tilt

Can we stop sleeping on BYU yet? The 17-point spread in favor of UCLA may be your underdog lock of the week, especially with how resilient the Cougars' defense has been against two relative heavies, Nebraska and BSU. UCLA wins this one, but it'll be a heck of a lot closer than the wise guys are predicting.