UCLA Should Not Fire Ben Howland 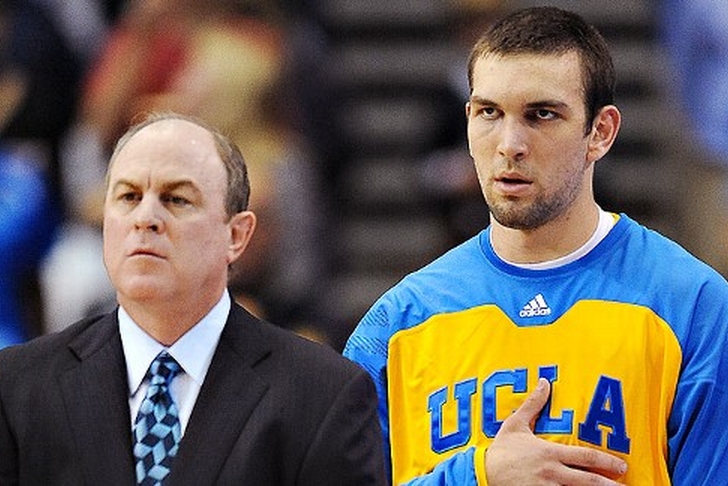 In light of the recent Sports Illustrated article, many in Westwood and around the country are calling for UCLA men's basketball coach Ben Howland to be fired. The article quotes many unnamed sources, and describes instances players abusing drugs and alcohol (at times before practice), hazing, and bullying during practice.

The article mainly focuses on the last two season and the beginning of this current season, and centers around the story's antagonist, former player Reeves Nelson. While Nelson has vehemently refuted the allegations in the story (going as far as hiring a lawyer), Howland has also spoke out against the story, saying in a public newsconference, "Some of the story's claims I had no knowledge about, some were taken out of context and some were not true."

While the story did shed some light on a tumultuous couple of years in UCLA basketball's history (complete with multiple transfers, arrests, suspensions, and players like Nelson being kicked off of the team for good), it doesn't exactly show Howland turning a blind eye to any activity. In each of the instances, the coach took disciplinary action when notified of any wrong doings. In the case of Reeves Nelson, although many think that Howland gave the player too much leeway, the story can also be viewed as a mentor trying to help a wayward youth until finally accepting fate and cutting ties.

More importantly, because of the use of unnamed sources, the Sports Illustrated article comes off more like The Bachelor's after show than a legitimate investigatory article. Like jilted lovers not getting a rose, the article feels like a collection of stories and complaints from a group of biased transfers (Drew Gordon, Mike Moser, Matt Carlino, etc.). Most players who transfer are unhappy about something (playing time, school work, friends, etc.) and leave for a reason. Talk to any transfer in the country, and they'll tell you what they think is wrong with the school/coach that they just left.

To think that this is a systemic problem and to place the blame squarely on the head coach is wrong. Not only do problems like the ones listed in the SI article happen all the time at prominent universities, great players transfer every year. Just look to North Carolina, where 3 players will have transferred to UCLA after this year (The Wear brothers and Larry Drew II).

The main problem in the case of Ben Howland, is that he's almost TOO GOOD of a recruiter. 11 of his recruits at UCLA are currently NBA players, more than any other Division I head coach. Some of these players were not highly rated in high school and Howland has been praised for developing them for professional basketball.  (UCLA leads all schools with 14 players currently playing in the NBA)

But with major talent comes its own set of difficult circumstances. Great high school players are often coddled during their young adulthood because of their talent, and many find it hard to deal with Howland's tough coaching approach. Others come expecting big time playing minutes, and bristle when they find themselves sitting on the bench in favor of better players. In Howland's case, many talented players have left the program because they felt that they weren't getting enough playing time. But if a future NBA All-Star is playing ahead of them, what is Howland supposed to do?

Speaking of the NBA, early entrants have been the single-most important factor for any of Howland's poor years at UCLA. Out of those 11 NBA players previously mentioned, only 2 of them stayed in school for all 4 years (Ryan Hollins and Darren Collison). No other Division I head coach has lost that much talent to the NBA, which has crippled UCLA teams over the past 5 years.

During the 2008 season, had no one left early for the NBA, Howland and UCLA could've fielded a team featuring Kevin Love, Jordan Farmar, Arron Afflalo, Darren Collison, Russell Westbrook, Luc Richard Mbah a Moute, and Jrue Holliday. Look at that line-up for a second. That's a full 7 man rotation of NBA players playing college basketball. With that lineup, Howland may have finally broken through and won an NCAA Championship (to go along with his 3 consecutive Final Four appearances). Instead, guys left early, and Howland had bits and pieces of players here and there to work with. Take this year for example, Malcolm Lee and Tyler Honeycutt could've (and maybe should've) stayed at UCLA. This season would be dramatically different with those two players on the roster.

While it may be time for Howland to change his recruiting approach, it's certainly not enough to get him fired. Players with NBA talent rarely stay for four years nowadays, so while elite players are definitely needed, Howland should be filling his roster with a mixture of talent and role players who will stay for four years and give the program some consistency. Because as we all know at the end of the day, it's about wins and losses, and not about petulant players transferring because they aren't getting enough playing time. If the Bruins were headed to the NCAA tournament this year, the SI story would've been a mere blip on the radar, quickly fading away because the players in question are no longer with the team, and because they're winning games. The story gains traction when the team is struggling.

Firing a coach should still be viewed as a dramatic step though, instead of a knee-jerk reaction after a poor season or two. Good college coaches are hard to find, and getting rid of yours doesn't necessarily mean that another one can be found. Programs can be set back up to five years by a coaching change, with recruiting losses, transfers, and the stigma of a rebuilding program being off-putting to many recruits.

Look no further than to UCLA's crosstown rival USC for what a coaching change can do to a program. After USC stopped actually paying their players and made a coaching change to Kevin O'Neill, they've had a difficult time keeping their program relevant. Mired in one of their worst seasons in history (6-26, 1-17 in Pac-12 Conference play), the Trojans season has largely been swept under the rug with little local or national attention. Apathy might be worse than bad SI articles though, as USC's recruiting class is looking a little paltry.

Ben Howland has had a fair amount of highs and lows during his tenure at UCLA. From Finals Fours to NCAA Tournament-less seasons, and even condemning major magazine articles, he has rarely had a dull moment in Westwood. But for those calling for the firing of the coach with the second highest number of wins in UCLA history, be careful what you wish for.

-  Mark Slattery is a Senior Writer for ChatSports.com, as well as the co-founder, writer, and editor of the award winning sports and travel websitewww.coupleofsports.com. Follow him on Facebook and Twitter.