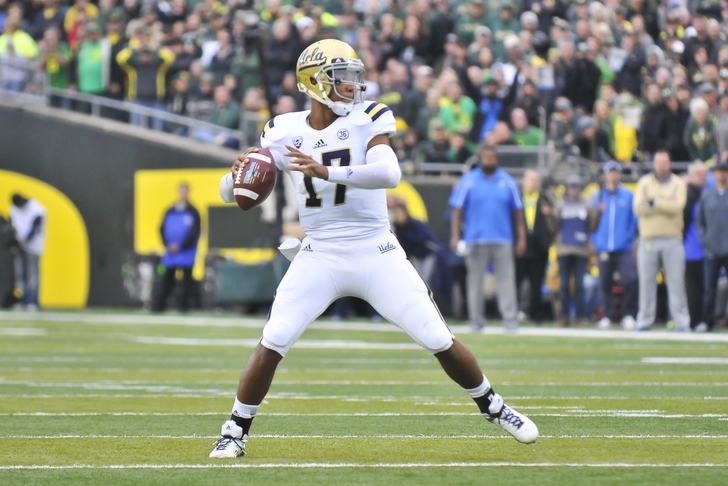 The UCLA Bruins turned a close game in the second quarter into a comfortable victory going away, scoring 24 of the game's last 30 points to break open a 14-14 tie and cruise to a 38-20 victory over the USC Trojans in Pasadena.

Turning Point: The Bruins cashed in touchdowns on their last drive of the first half and their first drive of the second half, transforming a tense 17-14 lead into a comfortable 31-14 margin.

Credit UCLA's offensive line for both their protection of QB Brett Hundley and their lead blocking which helped spring Paul Perkins free for the second touchdown of the two.

Key Stat: Per ESPN Stats & Info, UCLA has scored 30 points or more in three straight meetings with the Trojans for just the second time in the history of the rivalry (1996-98).

UCLA MVP: Could it be anybody other that QB Brett Hundley (22-of-31, 326 yards)? He passed for three touchdowns and ran for one more, accounting for 28 of the team's 38 points. Hundley's getting some attention as a dark horse Heisman candidate, and a performance like this is just what he needed to keep the momentum going.

USC MVP: This is a hard one. QB Cody Kessler did admirable to stay poised in the face of pressure, but he was under siege all night long (sacked six times) by the UCLA pass rush. Give the nod to freshman receiver JuJu Smith with his four catches, 79 yards, and continued emergence as a threat in the team's aerial game.

The UCLA Bruins have the inside track for the Pac-12 South slot in the conference title game, having beaten both Arizona and Arizona State. A victory at home against Stanford next Saturday will seal a rematch with Pac-12 North champ Oregon.

In contrast that night, a young USC team will be playing for pride (and perhaps bowl positioning) when they host Notre Dame.