3 Reasons Why UCLA Will Make The 2016 College Football Playoff 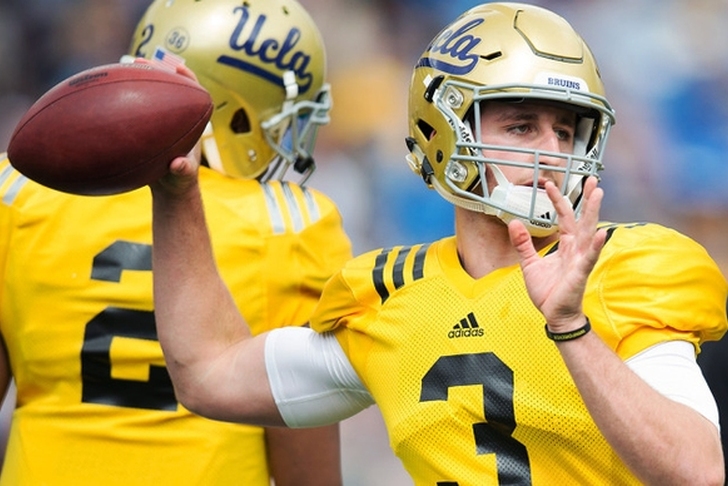 The USC Trojans may be getting all the run when it comes to Southern California college football programs, but it's the UCLA Bruins who we feel will rule Southern California (and the Pac-12) when all is said and done this coming season. Here's 3 Reasons Why UCLA Will Make The 2016 College Football Playoff.

True freshman QB Josh Rosen remains the far-and-away leader for UCLA's starting job, regardless of the tongue-lashing he received from head coach Jim Mora at a recent practice. However, there's a reason why one unnamed coach has gone so far as to call Rosen "the next Peyton Manning."  Freshman lapses in concetration or not, Rosen is a coach's dream -- big arm, innate instincts and an outsized drive to compete that makes everyone around him better. Giving him one of the most experienced and lethal offenses in the Pac-12 should be criminal, especially for how bad he's going to torch the rest of the conference once he gets into a full-scale groove.

It'll be tough getting used to life without linebacker Eric Kendricks, defensive end Owa Odighizuwa and cornerback Anthony Jefferson, but their departure is the gain of a wealth of blue-chip talent waiting in the wings. The secondary has some questions when it comes to the team's depth at cornerback, but other than that the defense is STACKED. Linebacker Myles Jack is now the de facto leader of a defense that may be young in key areas, but is also boasts more upside than that of the overhyped Trojans.

There are very few programs in the nation that boast 17 returning starters, and even fewer programs who also had a season like UCLA last year. There will be an adjustment period with Brett Hundley off to the NFL and Josh Rosen learning the ropes, but the Bruins still have the luxury of not only having experienced talent but experienced impact talent. USC and Oregon are the trendy picks to meet up in this coming winter's Pac-12 title game, but we're not buying it. UCLA is deep enough and locked-in enough to outdistance the favorites and earn a spot in the College Football Playoff.