3 Things UCLA Must Do To Beat Oregon 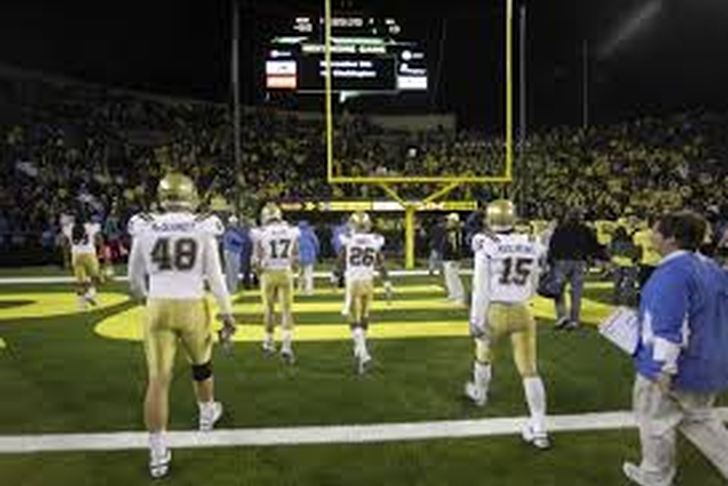 UCLA will travel to Autzen stadium tonight to take on the Oregon Ducks. Oregon hasn't lost at home since last season’s stunning loss to Stanford, in a game that kept Oregon from getting to the PAC-12 title game and as a result the National Championship game as well.

The Ducks are trying to make sure that they don't miss their shot at a national title again this season.

UCLA is coming off a tough road loss to Stanford, and are looking to bounce back. Unfortunately, Oregon isn't exactly the easiest team to have a bounce-back game against. Here are 3 things that UCLA must do if they plan to win this game.

Last week, Brett Hundley was sacked four times by Stanford's defense. That may not seem like a whole lot, but if you watched that game you saw Hundley under constant pressure – the number could have been much higher if he hadn’t used his athleticism to get out of trouble.

Hundley never looked comfortable, and that led to a poor game for the Bruins. UCLA's offensive line seemed to suffer injury after injury, and though at some point the starters all made their way back to the field, you could tell that they weren't 100%.

If UCLA can protect Hundley, then we can all expect him to put on quite the show. However, if he puts on anything like last weeks performance, the Ducks should capitalize quickly and the Bruins chances of an upset will evaporate.

Not one team this season has been able to slow down the Ducks offense. They’re second in the nation this season in points scored per contest, racking up 57.6 points per game. They also possess a very balanced attack with both their passing and running attacks in the top 20 nationally.

Don't forget about their special teams as well. They have been known to score on big plays, and Bralon Addison has two touchdowns on punt return touchdowns this season.

The number one priority has to be containing Mariota. It’s nearly impossible to shut him down completely, so the Bruins must find a way to limit him - starting with the running game. Mariota is second on the Ducks in rushing yards this season with 558. That may not seem like a whole lot at this point in the season, but don’t forget – he’s the quarterback.

Stopping the running attack will make the Ducks throw the ball more often, and while Mariota is still skilled throwing the ball, he can make a few mistakes.

If UCLA can limit Mariota's yards on the ground, they’ll have a great opportunity to keep within striking distance.

Last week against Stanford, UCLA never really looked like themselves. It's tough to pinpoint what it was exactly, but they were lacking something.

This stadium is going to be loud and annoying for the Bruins. They need to find a way to pick each other up, even when something goes wrong. If you have watched an Oregon game over the last few seasons, you’ve probably noticed the other teams hanging their heads after the first few touchdowns. UCLA needs to avoid the same fate.

If Oregon takes a lead early, they’re almost impossible to catch. UCLA needs to make sure that they keep a level head even if they get behind early. A good way to do that is make sure you match Oregon's intensity. This is a team fighting for a National Championship and a Pac-12 championship. They will be ready to battle.

UCLA will play better than they did last week, but it won’t be enough to stop this explosive offense.