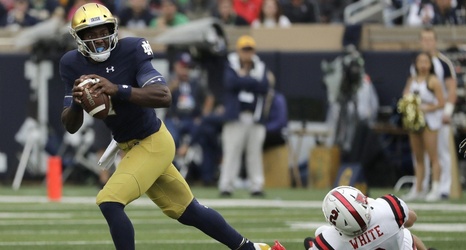 Notre Dame transfer quarteback Brandon Wimbush has enrolled in spring classes and is participating in offseason workouts, according to a school official.

Wimbush announced last week he was joining the Knights as a graduate transfer after spending the past three seasons at Notre Dame. He started 16 games for the Fighting Irish, but he was replaced three games into the 2018 season by Ian Book.

His swift enrollment at UCF allows Wimbush to immediately start learning the Knights’ playbook and later participate in spring football. Enrolling during the summer would have made it more difficult to compete for the Knights’ starting quarterback job.