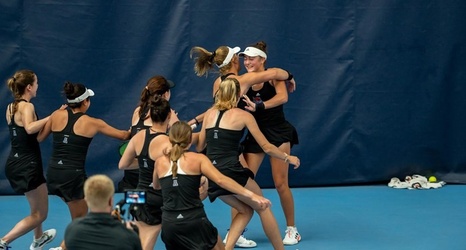 TULSA, Okla. –– The Tulsa women's tennis team will face the Memphis Tigers in the American Athletic Conference Championship match on Saturday afternoon at 4 p.m. (CT) at the Michael D. Case Tennis Center and will be broadcast on ESPN+.

The No. 3-seed Tulsa women defeated No. 2 SMU by a score of 4-3 as freshman Lilly Hutchings captured the winning point at No. 5 singles for the Golden Hurricane. Hutchings dropped the first set 6-1 before clawing back to win the second set 7-5 and claimed the match win in the third set 6-2.

Tulsa improved to 17-7 on the season with the win and heads back to the conference championship match for a second straight year and its sixth in the past eight years.