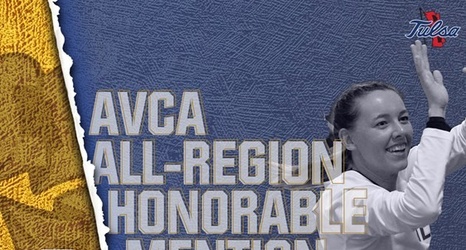 AVCA Release | NIVC Quarterfinal Tickets
LEXINGTON, Ky. - The University of Tulsa's Taylor Horsfall has been named to the American Volleyball Coaches Association (AVCA) All-North Region Team as an Honorable Mention, as announced by the organization on Tuesday. Horsfall becomes the eighth Golden Hurricane and 10th member of a TU volleyball team to ever earn AVCA All-Region honors, including the first since 2013.

"Taylor Horsfall deserves whatever awards she is given, and more," Tulsa head coach Ryan Wills said. "She plays volleyball at a level that would be highly successful in every single conference in America.