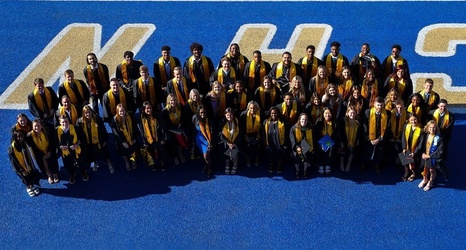 TULSA, Okla. –– More than 50 senior student-athletes crossed the stage to get their diplomas on Saturday morning during The University of Tulsa's commencement ceremonies at the Donald W. Reynolds Center.

Graduation culminated a successful athletics season for the Golden Hurricane which started in October when Tulsa's men's and women's cross-country teams swept the American Athletic Conference (AAC) Championships for the third consecutive season. The men finished the season ranked sixth in the USTFCCCA Cross Country national rankings after placing sixth at the NCAA Championship.

The men's soccer team tied its highest national ranking of second in the country en route to winning The American regular season and tournament titles and advancing to the quarterfinals of the NCAA Tournament, finishing the season with a 16-2-1 overall record and among the top-5 nationally in the three national soccer polls.