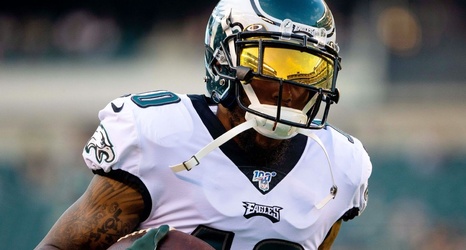 PHILADELPHIA -- Receiver DeSean Jackson has been released by the Philadelphia Eagles, the team announced Friday.

"Looking forward to my next chapter," Jackson posted on his Instagram story before the announcement was made official. "Philadelphia it's always Love. Appreciate Everything."

The Eagles acquired the 34-year-old Jackson from the Tampa Bay Buccaneers in 2019, reuniting the deep-threat receiver with the team that drafted him in 2008.

Jackson fueled the excitement with a pair of 50-plus-yard touchdowns in the 2019 opener against the Washington Football Team, but injuries limited his overall impact the past two seasons.