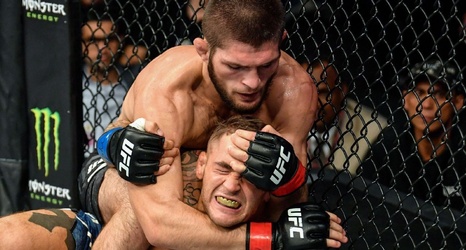 Dustin Poirier succumbed to the same fate as Conor McGregor. And no one has figured out how to deal with Khabib Nurmagomedov's wrestling, let alone beat him.

Nurmagomedov defeated Poirier by submission via rear-naked choke at 2:06 of the third round Saturday in the main event of UFC 242 in Abu Dhabi, United Arab Emirates. With the victory, Nurmagomedov unified the UFC lightweight title. Poirier came in as the interim champion.

The bout was significant for Nurmagomedov because of the location. Nurmagomedov is a devout Muslim from Dagestan, a republic of Russia, and it was his first UFC fight in a Muslim-majority country.