Eagles bench Jalen Hurts and Giants players, fans are beside themselves 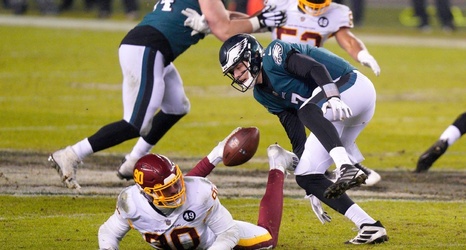 Pulling Hurts was the Eagles' plan going in to this game. Not only did it limit the punishment Hurts took behind a skeleton-crew offensive line while giving Sudfeld some reps, but it also conveniently lowered the Eagles' chances of winning the game.

The Eagles' 20-14 loss to Washington secured the No. 6 overall pick in April's NFL draft while a win would have dropped the Eagles to No.