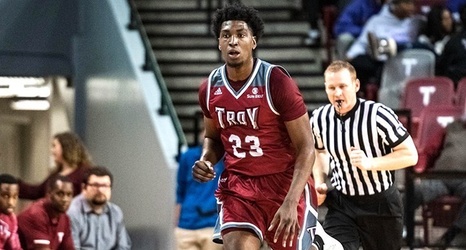 Troy basketball standout Jordan Varnado has been suspended indefinitely from the men’s basketball team, per a statement given to the media at Saturday’s home matchup against South Alabama.

The junior forward was dismissed due to a violation of team rules, according to Troy Athletics.

Varnado, from Brownsville, Tennessee, led the Trojans on both ends of the court, statistically leading Troy in points, blocks, rebounds, and field goals made, as well as points per game during a stellar sophomore campaign. Two years ago, the Trojans made a sweep through the Sun Belt tournament, clinching a spot in the NCAA tournament, matching up with the No.