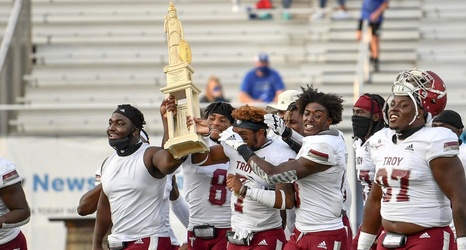 MURFREESBORO, Tenn. – The Troy football travel party had an extra member on the way back home Saturday night as the Trojans earned the coveted Palladium Trophy after a convincing 47-14 victory over Middle Tennessee at Floyd Stadium in the first matchup between the former Sun Belt Conference rivals since 2012.

The Palladium Trophy is given to the winner of the Troy-Middle Tennessee game.

"It's extremely exciting [to start this season off with a win],” Troy head coach Chip Lindsey said. “At one point we weren't sure if we would play. I told our guys that before we played today, 'Let's appreciate this opportunity to play, we weren't sure we were going to get to.