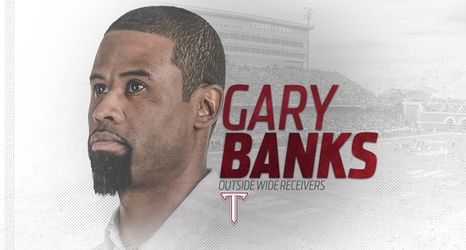 TROY, Ala. – Troy finalized its football coaching staff with the addition of Trojan great Gary Banks as the outside wide receivers coach, head coach Chip Lindsey announced Thursday. Banks won a pair of Sun Belt titles and played in two bowl games during his playing days for the Trojans before going on to a career in the NFL.

"I've had the opportunity to coach with Gary in the past and I know the kind of work ethic and knowledge he will bring to the table," Lindsey said. "Anytime you can bring a Troy guy home that is the caliber of person and coach that Gary Banks is, it's a home run hire.