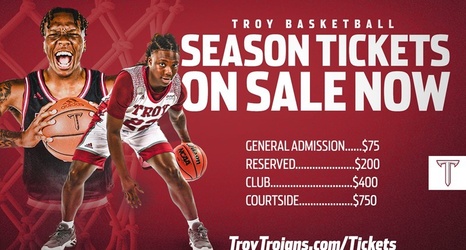 TROY, Ala. – The Troy University men's and women's basketball teams have announced that season tickets for the 2022-23 season are now on sale to the public.

The 2021-22 basketball season was kind to the Trojans, as both teams won a combined 44 games and went 22-5 in games played at Trojan Arena. The Troy men earned a four-seed in the Sun Belt Conference Tournament and went 1-1 in the postseason, while the women fell in the SBC championship game.

Additionally, the women's team captured another Sun Belt Conference regular season championship and hosted Alabama in the first round of the Women's NIT Tournament.