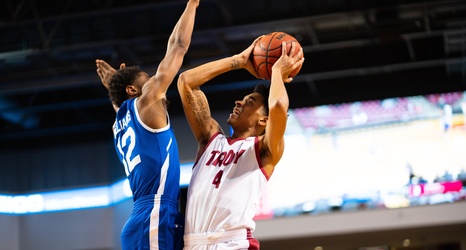 Freshman guard Desmond Williams drives the paint against Georgia State’s Justin Roberts in Troy’s upset win over the Panthers in Trojan Arena. Williams had 13 points on an efficient 5-9 shooting from the field and two 3-pointers. Williams also added six rebounds and an assist on Saturday.

The Troy’s men’s basketball team split its games against Georgia Southern and Georgia State in a homestand against two of the top Sun Belt Conference teams.

After last weekend’s games, the Trojans’ record moved to 8-12 overall and 4-5 in the Sun Belt Conference.