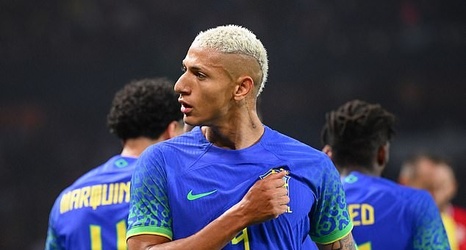 The Brazil FA vowed to fight 'racism and prejudice' last night after Richarlison had a banana thrown at him from the stands in his country's 5-1 friendly win over Tunisia in Paris.

The Tottenham forward was celebrating having put Brazil 2-1 in front at the Parc des Princes when a banana was thrown at his feet.

Prior to the game, five-time world champions Brazil team had posed for photographs with an anti-racism banner which read, 'Without our black players, we wouldn't have stars on our shirts'.

The Brazilian Football Federation (CBF) later issued a statement on the Richarlison incident via Twitter.