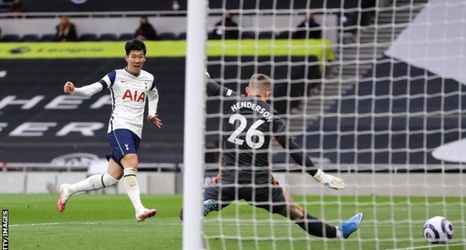 Tottenham are to "determine the most effective action moving forward" after Son Heung-min suffered "abhorrent" racist abuse on social media.

Team-mate Davinson Sanchez received racist messages on social media after a 2-2 draw at Newcastle on 4 April.

"Another matchday and more abhorrent racial abuse suffered by one of our players," said a Spurs statement.

"This has again been reported to the platforms and we shall now undertake a full review alongside the Premier League to determine the most effective action moving forward."

Son, who scored for Tottenham in Sunday's defeat, was involved in an incident in which Manchester United had a goal disallowed after he was caught in the face by Scott McTominay.