Their stadium doesn't meet UEFA standards, the owner demanded a direct phone line to the dugout and their squad value is just a TENTH of Mesut Ozil's annual wages... Meet Irish minnows Dundalk as they take on Arsenal in the Europa League 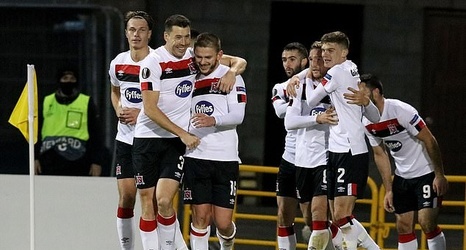 Irish club Dundalk have rubbed shoulders with the likes of Ajax, Liverpool, Tottenham, Porto and Red Star Belgrade during an extensive history in European competition dating back to 1963.

But that doesn't mean Thursday night's trip to the Emirates Stadium to face Arsenal will be any less exciting for the team known as The Lilywhites.

As you'd imagine, the gulf between the two clubs is enormous but the UEFA Europa League may prove to be a great leveller.

Dundalk's home Europa League group games will be played away from their Oriel Park home because it doesn't come up to UEFA specifications for Europa League games.