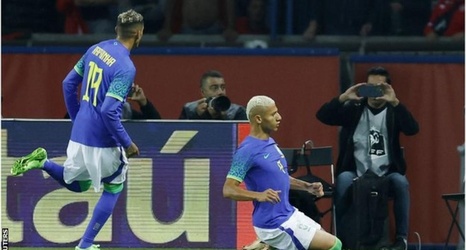 Brazil have condemned the racist abuse of Richarlison after the forward had a banana and other objects thrown at him in their 5-1 friendly win over Tunisia.

In a statement the Brazilian Football Confederation (CBF) said it "reinforced its position to combat racism" and "repudiates any display of prejudice".

Brazil had posed with an anti-racism banner prior to kick-off.

The team lined up with a message that read, 'Without our black players, we wouldn't have stars on our shirts'.

In a separate statement, CBF president Ednaldo Rodrigues added: "Whether on or off the field, attitudes like this cannot be tolerated.