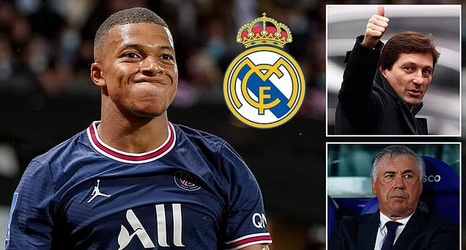 Paris Saint-Germain are reportedly digging their heels in as they look to hold off Real Madrid's strong interest in Kylian Mbappe, as the Spaniards consider returning for the Frenchman in January.

Mbappe, 22, has been Madrid's top priority for some time, with Los Blancos keen to land the Frenchman during Zinedine Zidane's tenure and the objective remains the same under Carlo Ancelotti.

However, Madrid have been met with strong resistance by the French giants, with PSG firmly rebuffing the Spaniards' attempts to land their striker, who has one year remaining on his contract.

PSG are putting the brakes on Kylian Mbappe's move to Real Madrid, according to reports

Newspaper Le Parisien report that the Ligue 1 side have rebuffed Real's latest £154million (180 million euro) offer for the France striker and are holding out for a third bid for him.