'He made a difference at that club': Jose Mourinho defends Gareth Bale's Real Madrid career and insists 'incredible' Welshman is close to finding his best after returning to Tottenham 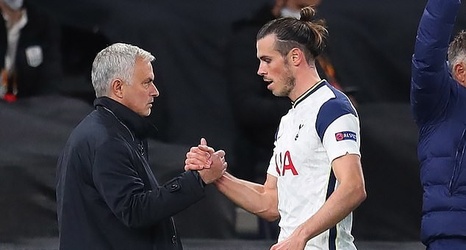 Jose Mourinho launched a fierce defence of Gareth Bale's time at Real Madrid as he revealed the Wales star was close to finding his best form at Tottenham.

Bale rejoined Spurs on loan from Madrid during the transfer window but left Spain under a cloud despite a trophy-laden seven years in the Spanish capital.

Bale was targeted by Spanish media and fans for his love of golf and his language skills - but Mourinho insisted Bale had been 'incredible' and 'amazing' since his arrival.

'One thing is reputation, another thing is facts,' said Mourinho, who confirmed Bale would start Thursday's Europa League tie at Royal Antwerp.