Frank Lampard admits it was 'difficult' to tell Callum Hudson-Odoi that he wouldn't be in the squad to face Tottenham despite starring against Rennes and Newcastle... but reveals he's back in contention to face Sevilla in Champions League clash 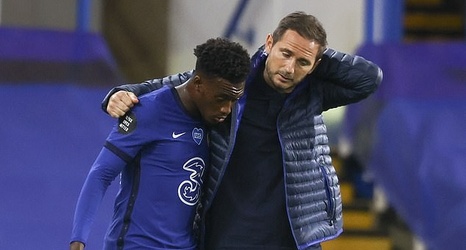 Frank Lampard has admitted it was difficult to tell Callum Hudson-Odoi that he would play no part in Chelsea's clash with Tottenham despite his good run of form.

Hudson-Odoi has impressed since making his way back into the team in recent weeks, having scored the opening goal in Chelsea's 2-1 win over Rennes before making a cameo role in the win over Newcastle.

He looked set to feature in Sunday's derby but Lampard had to tell him that he would not be in the squad against Spurs, which ended in a goalless stalemate at Stamford Bridge.