Euro 2020: Eriksen's first words after his cardiac arrest are revealed 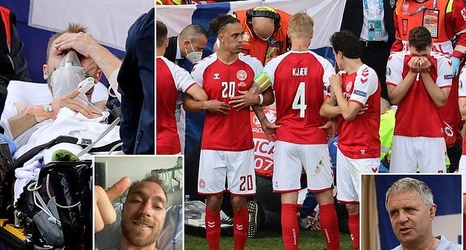 The doctor who helped bring Christian Eriksen back to life after he suffered a cardiac arrest in a Euro 2020 match last week has revealed what the Danish star said in the moments after he regained consciousness.

It comes as Denmark's national team doctor has announced that Eriksen will have a pacemaker fitted after his cardiac attack was caused by 'rhythm disturbances'.

The Inter Milan and former Tottenham midfielder collapsed during the first half of the group game in Copenhagen and required 13 minutes of CPR before he was taken to hospital in a stable condition, where he remains.