Christian Eriksen hails Denmark's 'fantastic' performance in WhatsApp messages sent from hospital, despite defeat by Belgium... as Martin Braithwaite insists they were 'forced' to play on against Finland after their team-mate's shock collapse 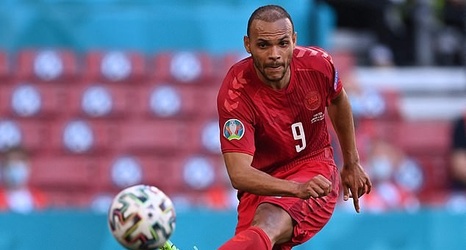 Martin Braithwaite has revealed Christian Eriksen hailed Denmark's performance in their defeat by Belgium as 'fantastic', before insisting they were forced to play on after the midfielder's horrific cardiac arrest last week.

The Inter Milan and former Tottenham midfielder collapsed during the first half of the group game with Finland in Copenhagen on June 12 and required 13 minutes of CPR before he was taken to hospital in a stable condition, where he remains.

Eriksen, who will now have a heart-starter fitted after his cardiac attack was caused by 'rhythm disturbances', watched on from hospital on Thursday night as Denmark were beaten by Belgium.