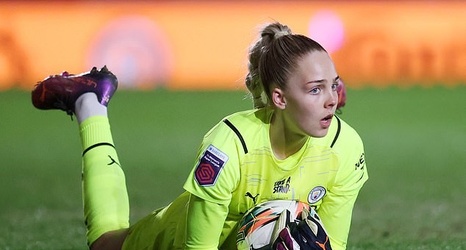 Roebuck suffered a blow to the head when she was clattered by Ashleigh Neville in the 69th minute but was allowed to carry on playing after being checked by medics.

However, 15 minutes later the keeper went down again and was eventually substituted. City boss Gareth Taylor said Roebuck was suffering from clouded vision in her right eye and was taken off as a precaution.

He said: ‘She had a couple of contacts, she took one in training yesterday in a clash with Bunny Shaw.