Anthony Joshua 'is set to QUIT his broadcasting deal with Sky Sports and sign a money spinning contract with DAZN ahead of rematch against Oleksandr Usyk'... after promoter Eddie Hearn agreed £100m-a-year deal with the streaming platform 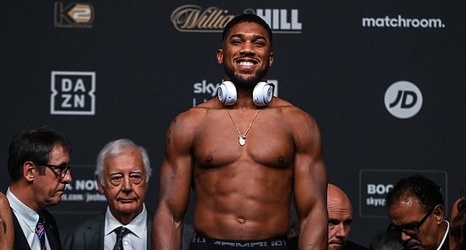 Anthony Joshua is set to turn his back on Sky Sports and sign a lucrative deal with streaming service DAZN, reports claim, as the heavyweight prepares for his crucial rematch against Oleksandr Usyk this summer.

Joshua has fought on Sky Sports for the entirity of his career, with his promoter Eddie Hearn previously having an exclusive deal with the broadcaster to stage his fights, but the Matchroom Boxing chief has since negotiated a £100m-per-year deal with DAZN that has seen him bring his entire stable on board.

Joshua had been the exception to this deal as he had a separate contract to show his fights exclusively on Sky Sports, but that expired after his first fight against Usyk at the Tottenham Hotspur Stadium in September - and the heavyweight has now defected to DAZN, reports the Sun.