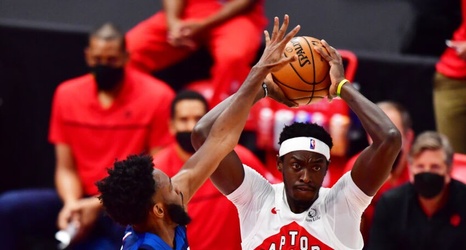 TAMPA, FLORIDA - FEBRUARY 14: Pascal Siakam #43 of the Toronto Raptors looks to pass the ball against Jaylen Nowell #4 of the Minnesota Timberwolves (Photo by Julio Aguilar/Getty Images)

The Toronto Raptors had to deal with a barrage of Pascal Siakam trade rumors, with everything from a swap with the Warriors and a deal that sends him to Sacramento being thrown against a wall in the hope that something would stick.

While the Raptors might be in a bit of a transition considering the fact that Kyle Lowry has departed, Masai Ujiri has continuously said that this franchise intends to win this year with a core of Siakam, Fred VanVleet, OG Anunoby, and Scottie Barnes.