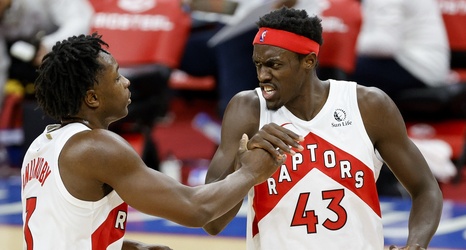 TAMPA, FLORIDA - APRIL 05: Gary Trent Jr. #33 of the Toronto Raptors celebrates with teammates after scoring a 3-point buzzer beater to defeat the Washington Wizards 103-101 at Amalie Arena on April 05, 2021 in Tampa, Florida. NOTE TO USER: User expressly acknowledges and agrees that, by downloading and or using this photograph, User is consenting to the terms and conditions of the Getty Images License Agreement. (Photo by Julio Aguilar/Getty Images)

After years of contending for a championship, the Toronto Raptors may take a slight step backward this season, as their roster of young players will likely not have the firepower to compete with elite teams like the Nets, Bucks, or 76ers.