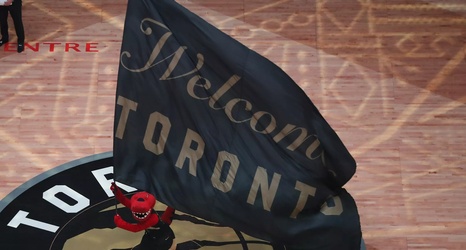 They were leaked the other day, but this morning the Toronto Raptors officially unveiled their 2019-20 City Edition look.

As expected, the jerseys feature a Drake/OVO-inspired black-and-gold color theme, with the “Toronto” word mark in the retro Raptors font across the front. The back of the jersey also features the spikes above the player name seen on the original Raptors jerseys, and has the jagged pinstripe on the side.

And yes — the gold patch representing Toronto’s NBA Championship is there on the back of the collar as well! Also, from that photo it looks to me like the “Toronto” across the front is larger than in the photos seen the other day.