Raptors lose their Summer League opener to the Warriors, 80-71 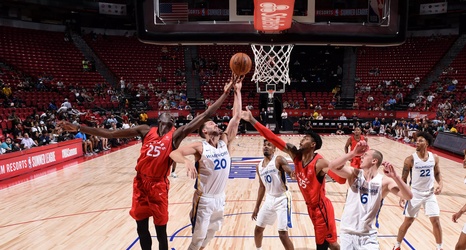 At midnight on Saturday night, the Raptors unofficially started their new season, fielding a roster with the core of their G League 905 team. It was a Raptors 905 reunion of sorts, as last year’s starting lineup was on the floor to start the game, with Malachi Richardson playing for their opponent on the night, the Warriors.

The game was expectedly sloppy. Both teams battled nerves, lack of familiarity, and subpar skill sets. The referees were in off-season mode as well, as the whistles (and non-calls) were horrible, which let the game get physical with bodies flying all over the place.